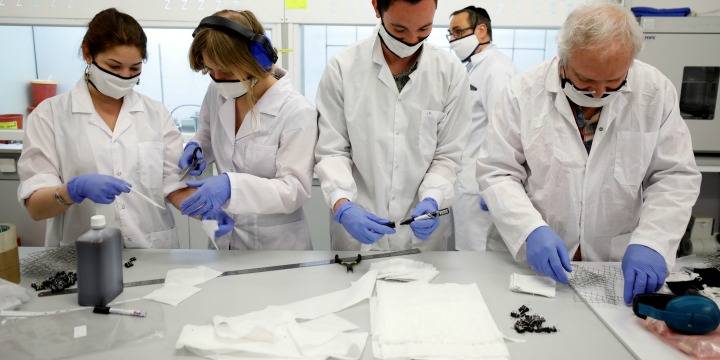 The COVID-19 pandemic has pillaged the global community; none have been left unaffected. In Israel, the disturbing side effects of the virus trickle down through all aspects of society. Even so, Israelis, deeply ingrained with a sense of resiliency – remnant of a past encompassed by existential threat  – have refused to wallow their despair. Instead of hiding under an isolating blanket of self-preservation, individuals and institutions alike are erecting platforms upon which unlikely partnerships can flourish. Although obscured by the virus’s destruction, new paths in Israeli society have been cleared, bound towards relationship-building and reconciliation between historic adversaries.

The Pakistan-Israel diplomatic relationship has always been precarious. For religious reasons, Pakistan adamantly opposed UN Resolution 181 in 1947. Although evidence of economic cooperation has since been discovered, Pakistan’s official government policy remains opposed to Israeli sovereignty. Antagonism between the two ideologically-opposed states intensified in the 1980s when Israel was suspected of collaborating with India to preemptively strike the Kahuta nuclear facility. During this period of heightened tension, the International Relations scholar Tajwar Ali was born.

A Pakistani Ph.d. candidate now studying Sino-Israel relations in China, Ali was encouraged by his professor to attend an online lecture about Zionism. Under normal circumstances, the class, a part of SIGNAL, Sino-Israel Global Network & Academic Leadership‘s Faculty Training Program (FTP) is reserved for Chinese faculty members at universities that host SIGNAL’s Israel Studies program and takes place at the Research Institute for the Study of Israel and Zionism at Ben-Gurion University of the Negev. Considering that Tajwar is not Chinese, and moreover that the Pakistani passport explicitly declares itself valid “for all the countries of the world except Israel,” Ali would have found it virtually impossible to attend an FTP class.

Like other academic institutions, SIGNAL adapted to the newly imposed global travel restrictions and launched an expanded online master class in Israel Studies. Consequently, Dr. Paulo Kabalo, director of the Ben-Gurion Research Institute for the Study of Israel and Zionism, who typically oversees the SIGNAL Faculty Fellows from Chinese universities, delivered a lecture to over 80 scholars. Reflecting on Tajwar’s choice to join her class, Dr. Kabalo said SIGNAL’s online course had “opened up an unexpected door. I certainly never before have been able to teach Pakistani students from the comfort of my home in Israel. SIGNAL has used technology to transcend boundaries and geopolitical tensions.”

Ali was raised during a time when the Pakistani media continuously bombarded the public with depictions of Israel as the enemy. Nevertheless, says Ali, “the media began to change its message around 2004” and started to promote “pragmatism and the elimination of unnecessary animosity.” According to Ali and his wife, Haseena Sultan, the Pakistani population today generally perceives Israel as a competent and prosperous nation; one which Pakistan would do well to invest in. As an International Relations researcher, he – and other Pakistani scholars – believe that “Israel will be a major player in the coming years,” and it would be illogical to perpetuate Israel-Pakistan hostility. Because of academic adaptations to the pandemic, Ali and his wife were given the opportunity to act on their more pragmatic views, and take a positive step to overcome the historically strained relationship.

Closer to its borders, another cultural bridge is being cemented in Israel – this time, into Gaza. Amid the complex, highly delicate Israel-Gaza situation, the Gaza Youth Committee instated “Skype With Your Enemy.” First established in 2015, the pandemic’s hysteria has noticeably prompted greater participation in the initiative. Switching platforms, the latest Zoom discussion session hosted more than 200 Gazans, keen to learn about the people they have been taught to hate. Conducted in English, the chat lasted for almost two hours. The young Israeli participants asked questions ranging from “do you have music festivals?” to “how do you maintain hope when things get tough?.” Mr. Rami Aman, Founder of the Youth Committee, responded that his faith is preserved by the growth of projects like “Skype With Your Enemy.”

In addition to increased online communication, the coronavirus also called for physical gatherings of medical experts from both sides of the barbed wire-lined border. The Israeli government has already facilitated several training sessions for Gazan medical aid workers. During these sessions, held at Sheba Medical Center, the 9th-best hospital globally, and Barzilai Medical Center in Ashkelon, Israelis taught the doctors and nurses from Gaza how to more effectively treat and care for those infected with COVID-19. While these workshops were designed to teach the medical workers how to tackle the coronavirus more effectively, they have also served as instruments of personal connectivity. Because of a global health crisis, the extraordinary intersection of Israeli and Gazan lives became unavoidable.

Domestically, the coronavirus has introduced an unprecedented sense of solidarity between Jews and Arabs. The relationship between Israeli Arabs and Jews is usually contentious. As Anwar Mhajne explains, “since 1948, we, the Palestinian minority, have been exposed to unfair laws…The state and Jewish Israelis constantly remind [us] of the fragility of our Israeli citizenship.” Nonetheless, because of the virus’s indiscriminate infection pattern, sentiments have changed. This year – compared to last year’s 42% – 77% of Israeli Arabs feel a sense of belonging to the state. This increased affinity towards Israel is undoubtedly a direct result of the thousands of Israeli Arabs working alongside their Jewish medical aid colleagues, combatting the coronavirus together on the frontlines.

Whether these cross-cultural platforms will outlast COVID-19 remains to be seen. The total devastation of the virus has yet to be quantified; many countries remain far from reaching the peak of the curve and are primarily concerned with ensuring the population’s physical well-being. Still, these boundary-breaking initiatives reveal an earnest inclination amongst the global community to both seek and engage in constructive dialogue with supposed adversaries. Should the government and civil society make a conscious effort to capitalize on and cultivate this momentum, Israel may be one step closer to peace.