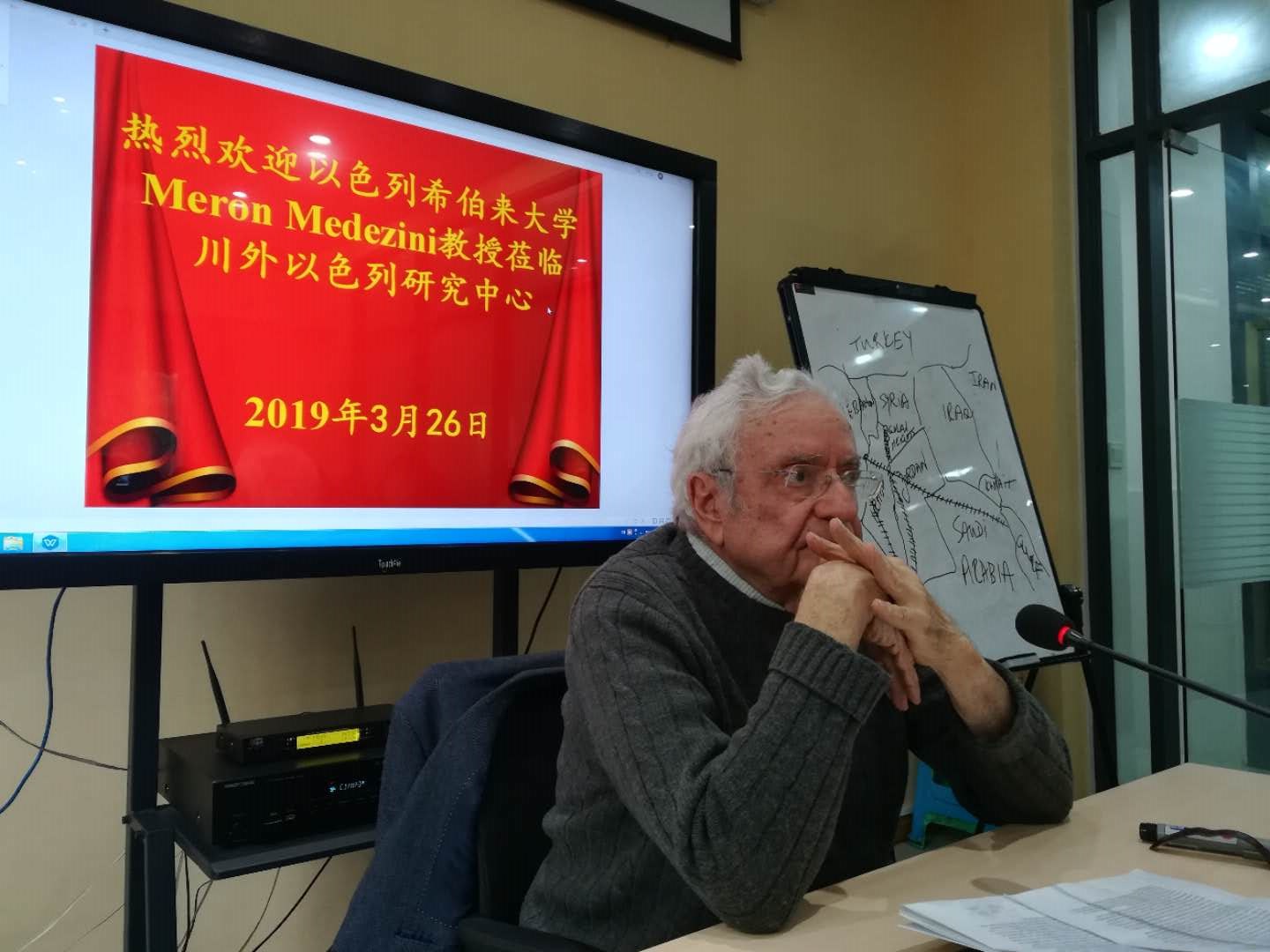 People-to-people relations are a core component of Xi Jinping Thought. The Chinese leadership has been responsible for crafting many policies that include or are centered around this formidable principle, such as the Belt and Road Initiative. As countries integrate economically and interact politically, having the cultural and personal understanding that comes from a direct individual contact, the road to improved economic, business, and strategic ties. A central method for strengthening people-to-people relations is via bilateral academic exchange.An excellent example of the very positive impact of this kind of exchange in strengthening ties between two countries is the story of the illustrious Professor Medzini.

At 87 years old, Professor Emeritus Meron Medzini is still a force to be reckoned with. A SIGNAL Distinguished Fellow, Prof. Medzini, recently completed his 6th and final Academic Seminar in China, where he lectured more than 1000 students, faculty and community members in several cities across the country.

Prof. Medzini has been an integral part of SIGNAL’s academic work in China since 2012, when he was introduced to the dynamic China-Israel space at SIGNAL’s Israel Studies Conference in Shanghai. That event was held in cooperation with Fudan University and Shanghai International Studies University and celebrated 20 years of formal diplomatic ties between the Middle Kingdom and the Jewish State. Fascinated by the opening of Israel Studies as an academic track, carried out through cooperation between SIGNAL and universities across China, Prof. Medzini spent upwards of a month at a time in China each year presenting Israel to thousands of students and educators. Professor Medzini enjoyed teaching Chinese students, and even more, they enjoyed learning from him. His first-hand knowledge of Israel’s incredible history provided students and faculty with a visceral understanding of the events that shaped the Jewish state. He has had an incredible career that informed his sophisticated understanding of China.

Prof. Medzini earned his Ph.D. from Harvard in 1964 with a dissertation focused on Franco-Japanese relations. Immediately afterward he began his teaching career at the Hebrew University of Jerusalem, an institution he lectured at for more than 40 years, eventually earning emeritus status. During part of his teaching tenure, Prof. Medzini also served as the Director of the Government Press Office in the Prime Minister’s Office under the administrations of David Ben Gurion, Levi Eshkol, Golda Meir and Yitzhak Rabin. He recalled the most exciting moment of his career – and life – during this time. In 1967, he visited the Western Wall with a group of foreign correspondents just minutes after it had been liberated by the Israel Defense Forces in the 6-Day War. While working for Keren HaYesod one of the fundraising arms of the Jewish Agency for Israel, his interest in Jewish communities around the globe was both sparked and nurtured. This passion led him to his current research on Israeli communities across East Asia, and he has visited Thailand, China, Taiwan, Hong Kong and Singapore in his pursuit of learning more about them. He has received various honors and awards, including the Order of the Rising Sun by the Japanese government, 2 outstanding teacher awards at Hebrew University, and the Prime Minister’s Award for his biographies on Golda Meir. His works on Golda were particularly meaningful for him. He effectively grew up in Golda Meir’s kitchen, as his mother was a friend of hers from childhood, having met in second grade. As a result, he knew her his entire life, and has said she was like a member of his family.

In his 6 Academic Seminar trips with SIGNAL, Prof. Medzini has lectured at 25 universities, several research centers and think tanks, and has attended two conferences in China. He has spent hundreds of hours teaching thousands of students, faculty and professionals. He has lectured on various subjects, including Israeli foreign affairs, the history of the Arab-Israeli conflict, Jewish communities in Asia, Israeli-American relations, and Israel and the Belt and Road Initiative, among others.

During his last trip, Prof. Medzini visited 20 universities and think tanks across China. He lectured in Beijing, Chengdu, Chongqing, Xi’an, Guangzhou, Shenzhen and Hong Kong. In Beijing, he spoke at the China Institute of International Studies, where he discussed Chinese policy in the Middle East and the new directions in which it is heading. He then lectured at the Chinese Academy of Social Sciences, covering recent developments regarding China and Israel, and specifically the U.S. intervention in the Haifa Port deal – a topic requested by CASS’s Deputy President, Prof. Da Wei. While in Beijing, he also spoke on China and the Middle East at Renmin University, China-Israel economics and the BRI at Beijing Foreign Studies University and on Jewish communities in Asia at Beijing Language and Culture University. He also engaged in deep discussions in less formal settings, including one in the home of the former Austrian minister to Peking, where he and the Director of the Center for Middle East Studies at the China Institute of International Studies discussed possible scenarios for the future of the Middle East.

From there, he traveled to Chengdu, where he completed three lectures on Israel, China and the BRI, a popular topic. He traveled to (relatively) nearby city of Chongqing for additional lectures, including one in which he spoke about current events in Israel, including recent rocket fire towards Tel Aviv as well as activities in the Golan Heights.

The next leg of his trip took him to Xi’an, where he was accompanied by SIGNAL’s China-based colleague, Helen Guan. He spoke at Northwestern University on Israeli communities in East and Southeast Asia, a topic of particular interest to him, and one that he noted was a new subject to nearly everyone who attended the lecture. At Shanxi Normal University, he spoke on issues of leadership in Israel, a wide-ranging topic in which he was able to speak about his experiences working with several prime ministers, as well as about Zionism, anti-Semitism and the need for a Jewish state. At the conclusion of his talk there, he was presented with a Chinese translation of Golda Meir’s My Life.

In Guangzhou, Prof. Medzini was hosted by the Israeli consulate and spoke at a number of events there. He spoke again on Israel-China relations, as well as future cooperation between the two countries and the similarities between the Jewish and Chinese civilizations and their histories. He lectured on China-Israel relations, Jewish communities in Asia, Israel and the BRI, Chinese relations in the Middle East and Israel’s Asia policy. Briefings were attended by anywhere from a dozen people to more than 400.

Prof. Medzini has described his academic seminars with SIGNAL as being “highly rewarding, interesting, and an enriching experience for one who loves to teach.”

Aside from these seminars, Medzini has also made many contributions to SIGNAL. He co-wrote, with Carice, an essay on Sino-Israeli relations in 2015 for China’s Israel Blue Book. He spent the summer of 2014 teaching a course at Renmin University and conducting research at the Center for Middle East and Africa Studies, a think tank in Beijing co-established with SIGNAL. He co-wrote a paper with CMEAS’s Chinese director, Prof. Shoujun Cui, and Dr. Jonathan Teitelbaum entitled “Can China-Taiwan ‘Cross-Straits’ relations serve as a model for Israeli-Palestinian Cooperation? A Proposal.” Medzini has been a Senior SIGNAL Fellow since 2014, and a Distinguished Fellow since 2019.
As a “living history of the state of Israel,” as Carice once put it, Prof. Medzini’s expertise and experience are unparalleled. With a sophisticated understanding of China and a breadth and depth of knowledge with regard to Chinese history, Prof. Medzini is unique in his ability to make comparisons between the Middle Kingdom and the Jewish State.

Another added that he was a “good example of Israeli spirit,” especially as an octogenarian “still serving his people.”

PrevPreviousEverything Over the Heavens: A new arena for confrontation and cooperation
NextMiddle East presentation at the Beijing Xiangshan Forum, by Mr. Ahmed Al Mansoori, DubaiNext